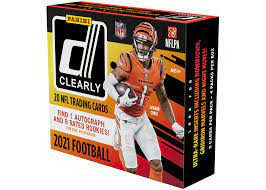 One of the most anticipated releases of the of the year, 2021 Clearly Donruss is loaded with all acetate autographs, parallels and inserts from the best of this year’s stellar rookie class!

Search for fan-favorite inserts and their autograph parallels in Clearly My House!, Clearly The Rookies, Clearly Out of this World and Clearly Dominant!

Chase Rated Rookie tribute cards that feature acetate re-creations from some of the most iconic rookies in the NFL’s recent history from stars such as Peyton Manning, Kyler Murray, Aaron Rodgers and many more!