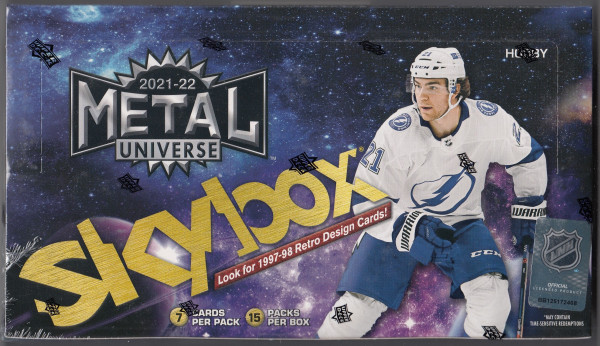 Five Big Man on Ice, The Cheddar, and/or Amped Up Insert Cards

One Additional Hit - Includes Autos, PMGs, Jambalayas and others!

Skybox Metal Universe sports a 200-card Base Set, which breaks down as follows:

Grab at least One Rookie or Alternate Jersey Variation card per pack, on average, and keep an eye out for a bevy of numbered parallels, including 1-of-1 Gold PMG (Precious Metal Gems) and autograph parallels!  Additionally, collect the 97-98 Retros, a 50-card design variation featuring the top rookies from the Base Set. Each card in this collection sports a unique background featuring original artwork from the 1997-98 Metal Universe Base Set!

Look for new inserts sets Big Man on Ice, The Cheddar, Amped Up, Neon Icons, and Pitter Patter featuring the top players and rookies from the NHL.  Make sure to look out for Gold and Autograph parallels of these insert sets.

Platinum Portraits cards are returning, featuring laser die-cut cards of the games top players and rookies.  Also, be sure to collect the rare Metal-X set featuring stunning cards made from metallic paper.

The uniquely-designed and super rare Jambalaya insert boasts many of the best players in the game today.